This Historic Development and Character Analysis have been prepared by ADAM Urbanism in support of the SPD for the Whitfield Urban Extension (WUE).

The village of Whitfield has grown so that it is now physically connected to urban Dover, Kent, yet it has kept its own identity and sense of place.

Church Whitfield seems to have originated around a small, enclosed farmstead; archaeological work in the area showed that there was a collection of structures on the site during the early medieval period and evidence of both Roman and Saxon settlements. The Roman road from Dover (Dubris) to Richborough (Rutupiae) runs north-south near Pineham, suggesting that the village developed along its route. The village church, dedicated to St Peter, is testament to this history; the church is a 10th Century Saxon structure largely rebuilt in Norman times, though the church is first mentioned in 762 AD. The building has two Saxon windows, and the bell dates from the 13th century.

The village was originally known as ‘Bewsfield’, which is said to refer to its high and open situation. It is thought that Whitfield began to be called ‘Whytefeld’ in the mid-seventeenth century.

At some point in the later medieval period, a new village was formed to the west. This may have been due to the Black Death, whereby many villages moved their centre of habitation a mile or two for fear of being too near the burial site of victims. The ‘new’ village became known as West Whitfield, before changing to Lower Whitfield and simply as ‘Whitfield’ as the village gradually grew. Old Whitfield to the northeast then became known as Church Whitfield. The villages developed quite different characters but maintained a close attachment in terms of physical proximity. Early maps such as the Andrews and Drury map of 1769, shows the basic arrangement of the villages, as separate, but linked hamlets. 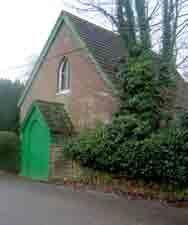 The Historic Form of Whitfield Map research shows the small scale, village origins of Whitfield, before twentieth century expansion. The village was based around a roughly triangular road pattern, comprising Forge Lane/Lenacre Lane, Church Lane (now Napchester Road and Nursery Lane), and what is known today as The Drove. To the west, development was centred around Lenacre Court, although the original Lenacre Manor may originally have been located further south; a ‘Lennickers’ is shown on early nineteenth century maps, on roughly the location of Bewsbury Cross Farm. This development led along forge lane to the north, around Whitfield house, and towards the Congregational Chapel, originally built in 1781. To the east, development was clustered around the Windmill with a bakery beneath, originally built in 1755.

The example at Whitfield was a smock mill, consisting of an octagonal, weather boarded tower, on a brick or masonry base. However, windmills suffered a rapid decline during the early twentieth century due to an influx of cheap imported grain and new government food regulations. Whitfield mill was demolished in 1916 after standing derelict for many years. This was originally a key focus to the village. 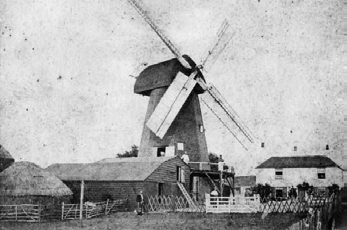 The village was linked to Church Whitfield and Pineham via Shepherds Cross to the north, and through a series of lanes and footpaths across the fields. It is clear that Whitfield was originally very rural in character with a tight knit collection of lanes in the oldest section of the village to the north of Nursery Lane. Map research shows however, that Whitfield was bisected in the early nineteenth century by the main Sandwich Road. The Mudge map of 1801 shows that a small lane or footpath had been built linking church lane to the crossroads at the top of forge lane.

However, by the production of the first small scale ordnance survey maps in 1816, a main route running directly through the village from north to south had been constructed. This altered the village in a drastic manner, literally cutting the settlement in half – the reasoning behind the chosen route is unclear. The Royal Oak Public house dates from this time, built as a coaching stop along this main route to the improving harbour at Sandwich. 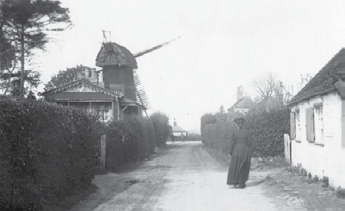 The modern Whitfield developed when more affluent citizens of Dover began to build new homes, alongside the junction of the A2 and A256 roads near the village. Gradually, the historic built form has been subsumed into the modern housing with no clear distinction created between the older segments of the village, and the modern growth. This has diluted the architectural character of Whitfield. As a result, Whitfield is now largely suburban in character, with remnants of the older village scattered throughout. There are a few elements within Whitfield that give some indication of the original character of the village, within the network of small lanes. Post housing dates from the post-war period. Where historic buildings survive, they show a strong tradition of brick and flint. In contrast, church Whitfield has retained a very rural character with a small cluster of houses and farms built around the church. The houses have however, been altered in form and are now mainly rendered and modernised.

Post war development enlarged the village and in the 1960s new estates such as Beauxfield were built and extended in the 1980s. Newlands, Cranleigh Drive and Farncombe Way were built in the 1970s.