Harriet Quimby was an early American aviatrix.  In 1911 she became the first woman to gain a United States pilot’s licence.

Harriet was born in 1875 in Arcadia, Michigan.  She became a journalist in San Francisco and later worked as a theatre critic in New York.  She also wrote five romantic screenplays, which were made into silent film shorts, directed by D W Griffith.  Harriet had a small acting part in one of the films.

Her interest in aviation began in 1910 when she attended the Belmont Park International Aviation Tournament on Long Island, New York and met aviation pioneer John Moisant and his sister, Matilde, who went on to become the second female licensed pilot in the United States.  Moisant knew the Dover area.  Photographs and newspaper reports exist recording his landing at Tilmanstone.

Less than a year after gaining her licence Harriet Quimby became the first woman to fly solo across the English Channel.  Early on 16 April 1912, wearing her trademark purple flying suit, Harriet took off from Whitfield Aerodrome and landed some 59 minutes later on the beach at Hardelot, 25 miles from Calais.

Her recollections of the event were:
“It was five-thirty A.M. when my machine got off the ground. The preliminaries were brief. Hearty handshakes were quickly given, the motor began to make its twelve hundred revolutions a minute, and I put up my hand to give the signal of release. Then I was off. The noise of the motor drowned the shouts and cheers of friends below. In a moment I was in the air, climbing steadily . . .In an instant I was beyond the cliffs and over the channel.”

Her achievement, however, went largely unreported and unnoticed at the time as the newspapers were full of reports of the tragic events of the previous day – the sinking of RMS Titanic.  She later received accolades in Paris and London before being welcomed home a heroine the following month.

Harriet Quimby’s aviation career was to be short one.  Just a few months later, on 1 July 1912, she was flying at the Annual Boston Aviation Meet when. at an altitude of 1500ft, her brand new Bleriot monoplane unexpectedly pitched forward and she and her passenger, William Willard, the event organiser, were ejected from their seats and fell to their deaths while the plane glided down into thick mud.

In 1991 a US airmail postage stamp featuring Quimby was produced.  A monument marking her life and achievements can be found near the ruins of the house in which she was born in Michigan.  Locally, there is no record of her flight but as the 100th anniversary of her achievement approaches, The Harriet Quimby Centenary Project has been formed with the aim of providing events and material designed to tell the story of her life an achievements, a plaque in Whitfield near the site of the Aerodrome and culminating in a permanent memorial designed by award-winning artist Peter Wallwork Naylor, to be sited on Langdon Cliffs.

Although she only lived to the age of 37, Harriet Quimby had a major influence upon the role of women in aviation and could well have been the inspiration for much better known pioneers such as Amy Johnson and Amelia Earhart. 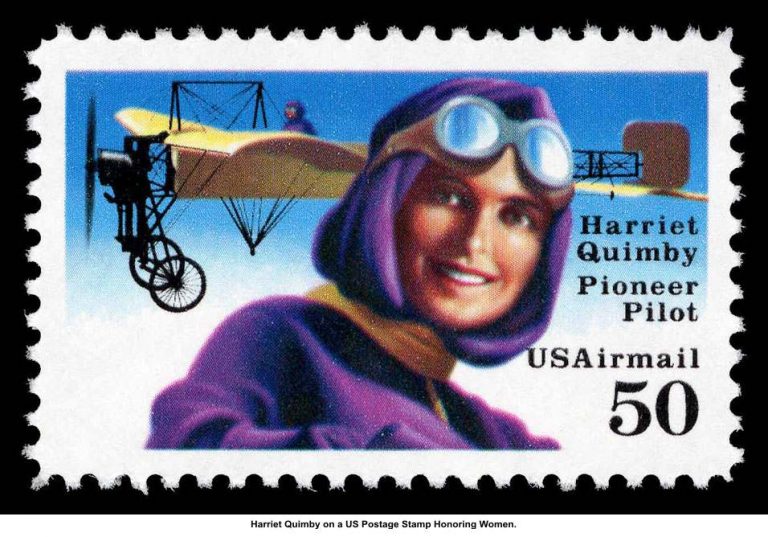